When you've finished adding content to an edition, you can set it to go live by scheduling it. When an edition is scheduled, it means that the content in each of the slots that it contains will be published on the edition start date.

To schedule an edition, open the edition and select the 'Schedule' button as highlighted in the image below. 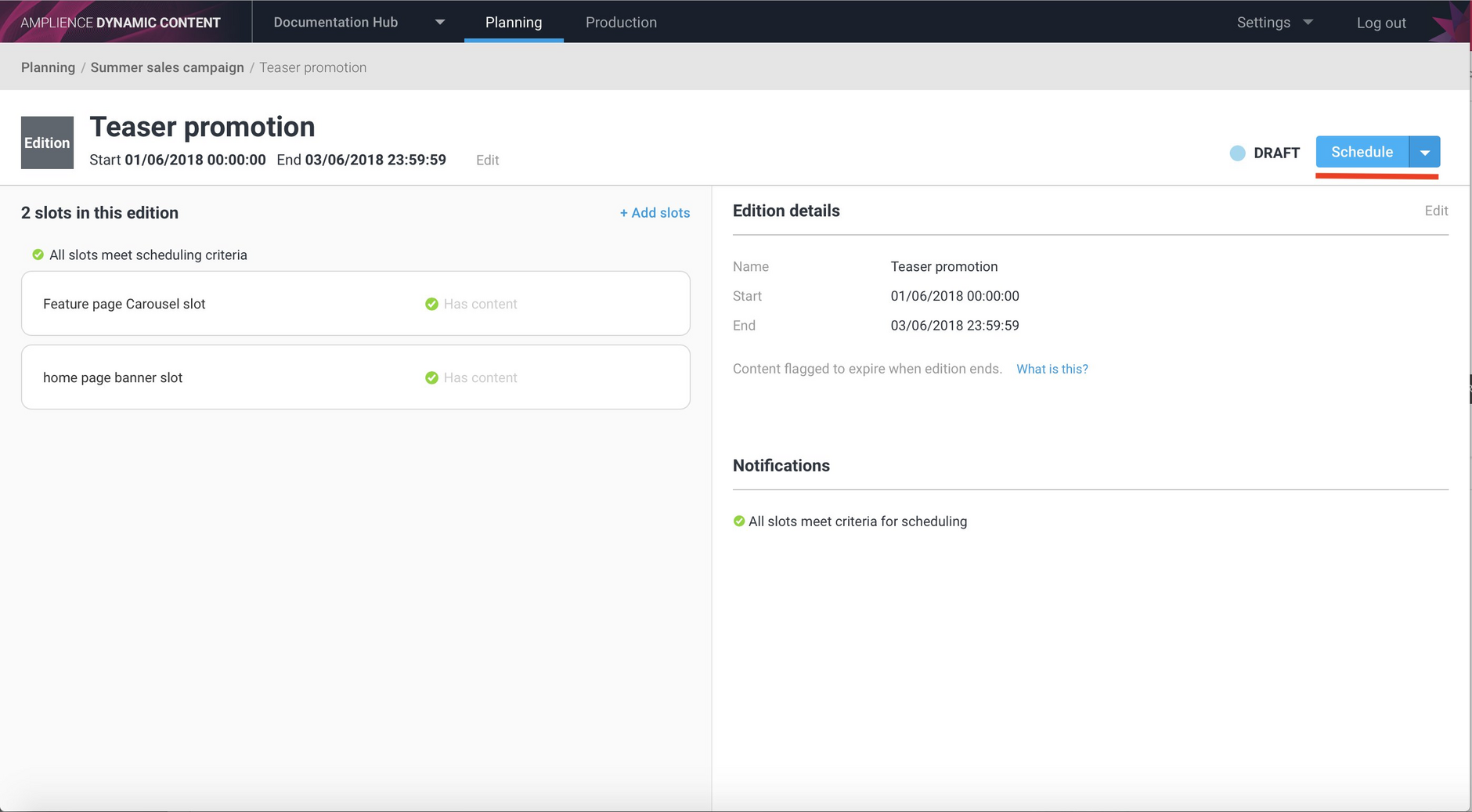 A dialog will be displayed that shows when the content will be published to the slots in this edition and whether it is set to expire on the edition's end date. 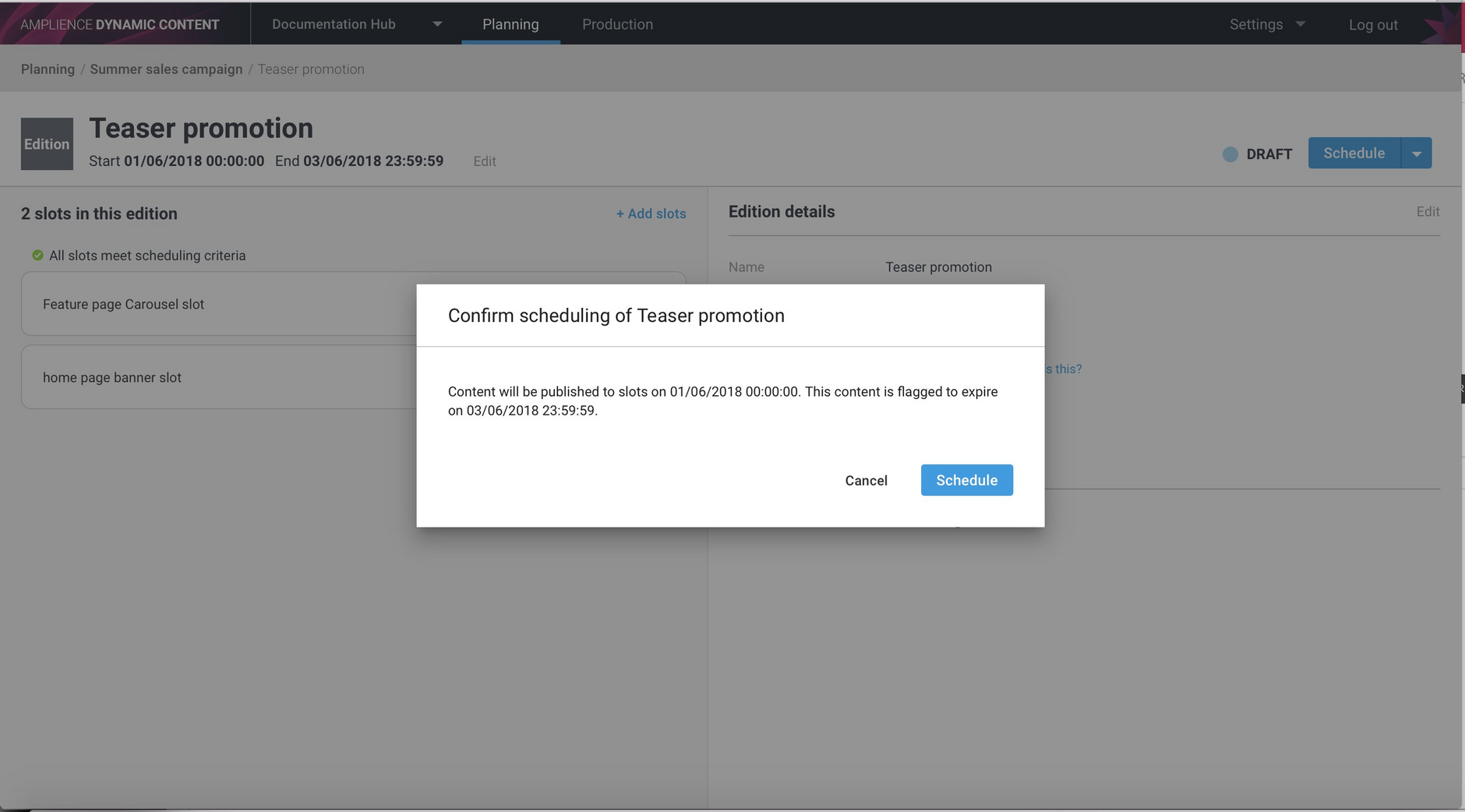 Scheduling may take a few seconds, so a spinning icon is displayed to indicate that it's in progress. 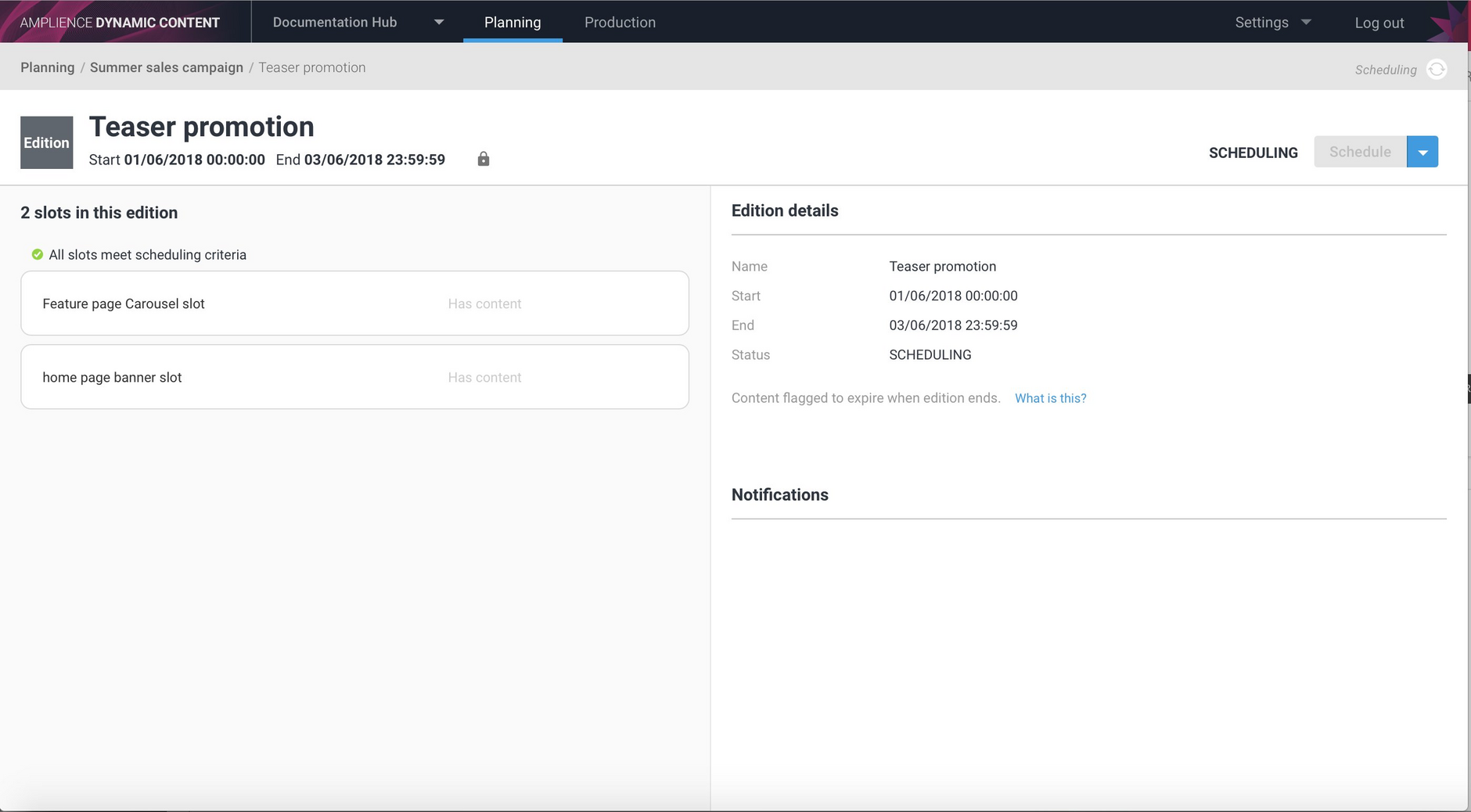 Once the edition is successfully scheduled, then its status will change to scheduled and a lock icon will appear indicating that the edition can no longer be edited. 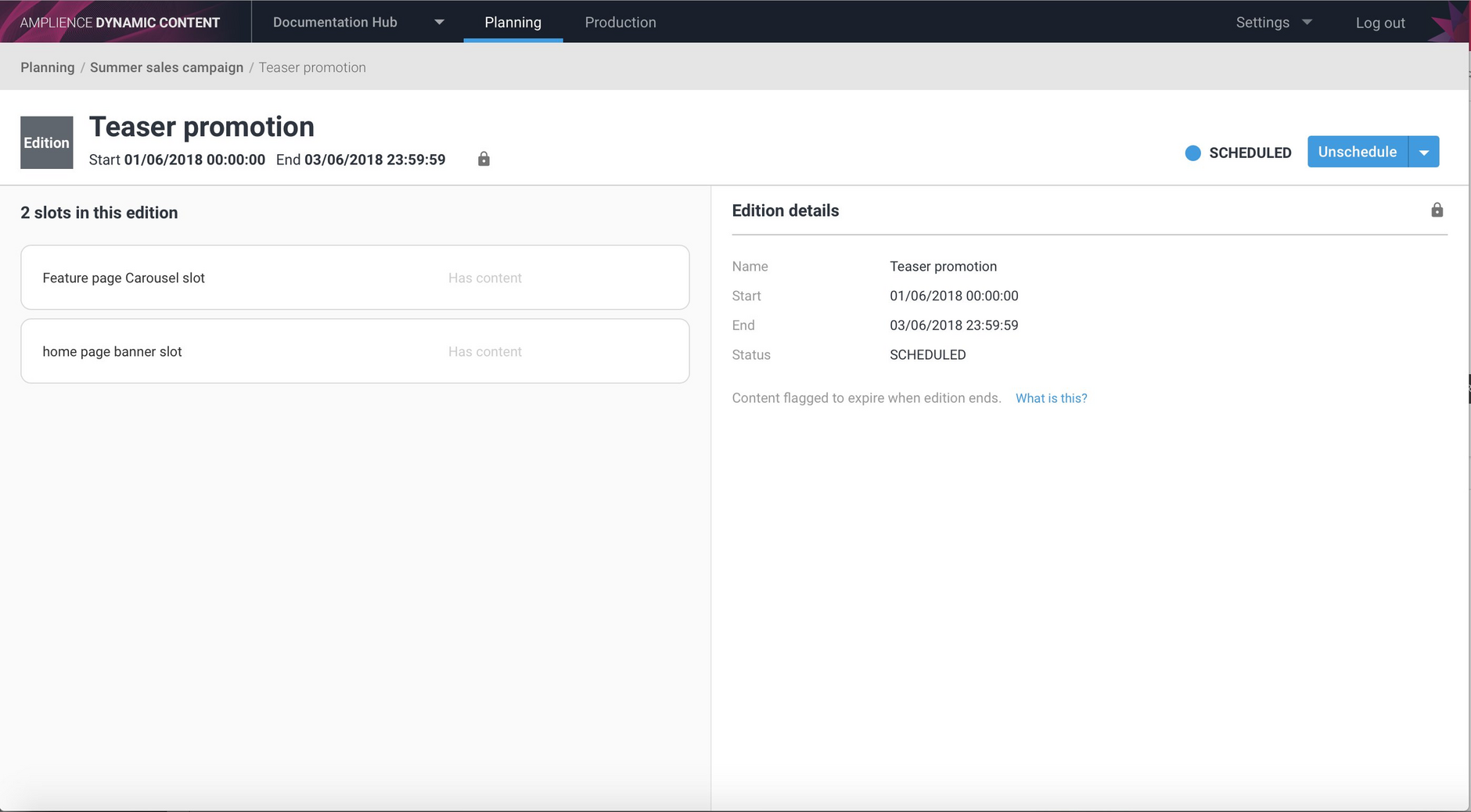 The edition status will also be updated in the calendar view, so you can see at a glance which editions are scheduled to go live. 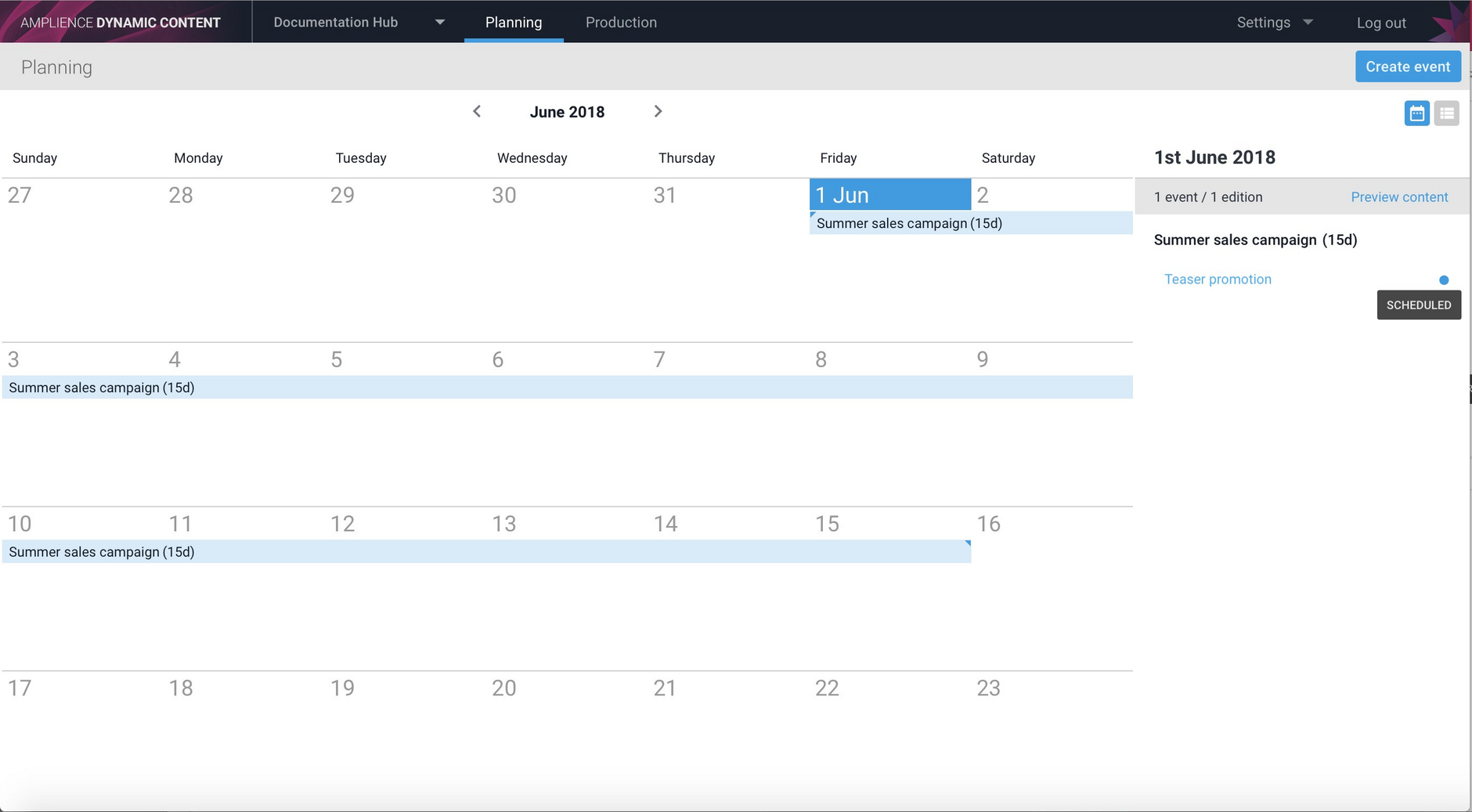 When viewing the summer sales campaign event you can see that the teaser promotion edition is scheduled and the other two editions in the event have a status of draft.

Content will be published to the slots in the teaser promotion edition on the edition start date. When the edition is published, its status will change to a green published icon.

Here's an example of a published edition: 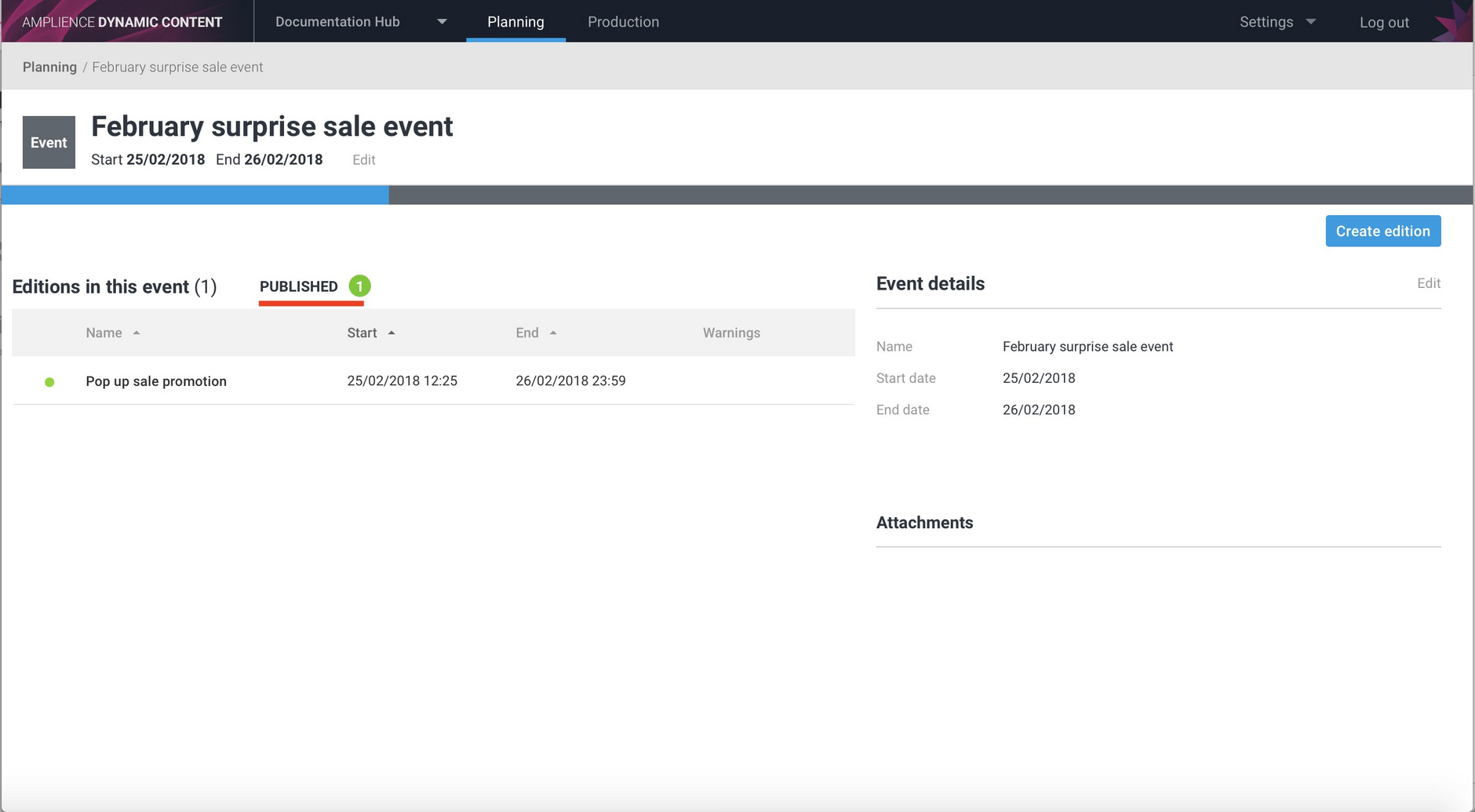 If you want to make changes to a scheduled edition, you first have to unschedule it. This will set the edition's schedule back to draft and allow you to edit it. Once you've made the changes, you can schedule the edition again.

To make some changes to the teaser promotion, to add or edit some content, for example, or to change the date the start and end of the edition, we would unschedule it by viewing the edition and clicking the "Unschedule" button at the top of the edition window. 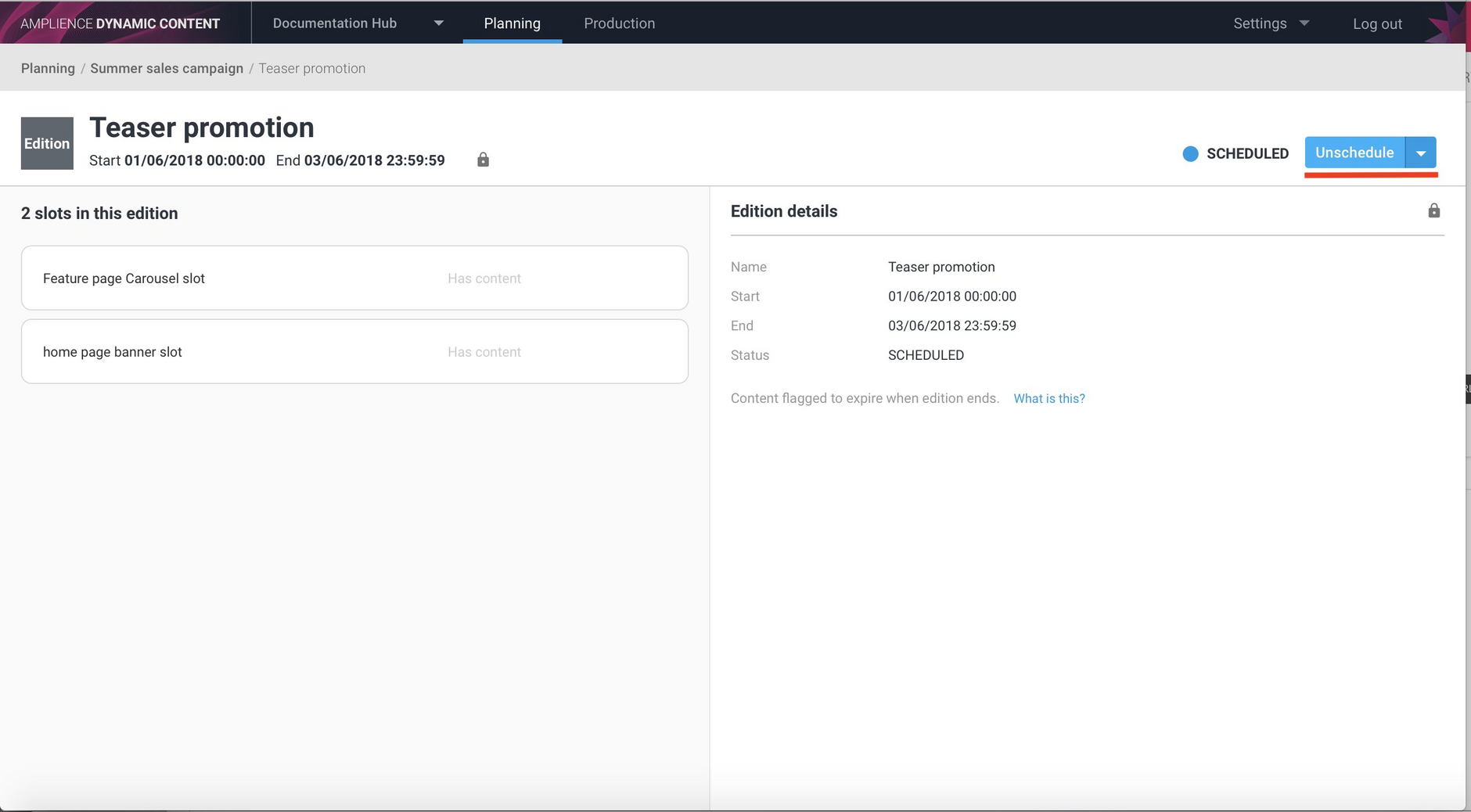 A dialog is shown asking for confirmation to go ahead and unschedule the edition. We click Unschedule. 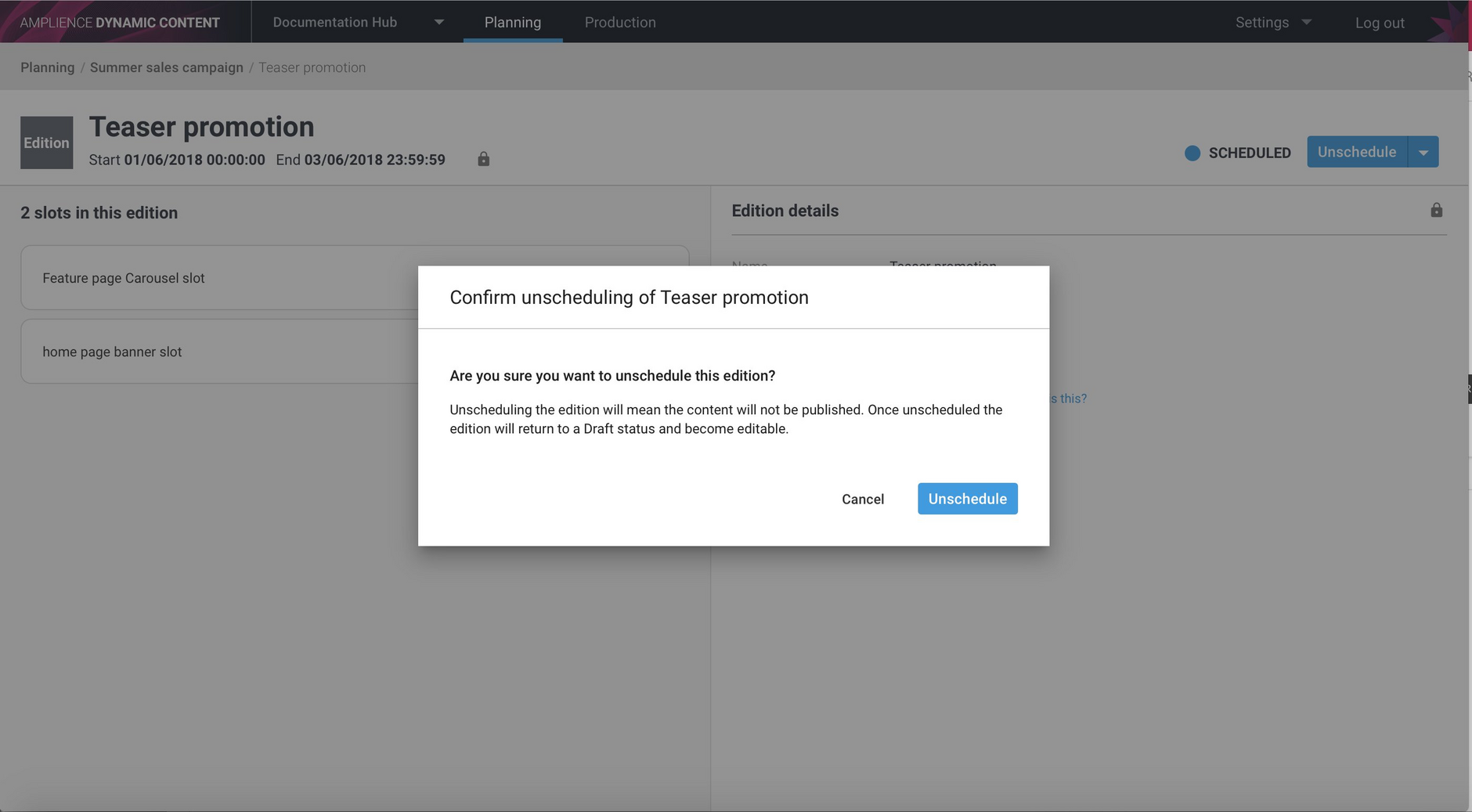 The edition has been unscheduled and is now back in draft state. It can now be edited, or even deleted completely. Once the changes have been made, the edition can be scheduled again. 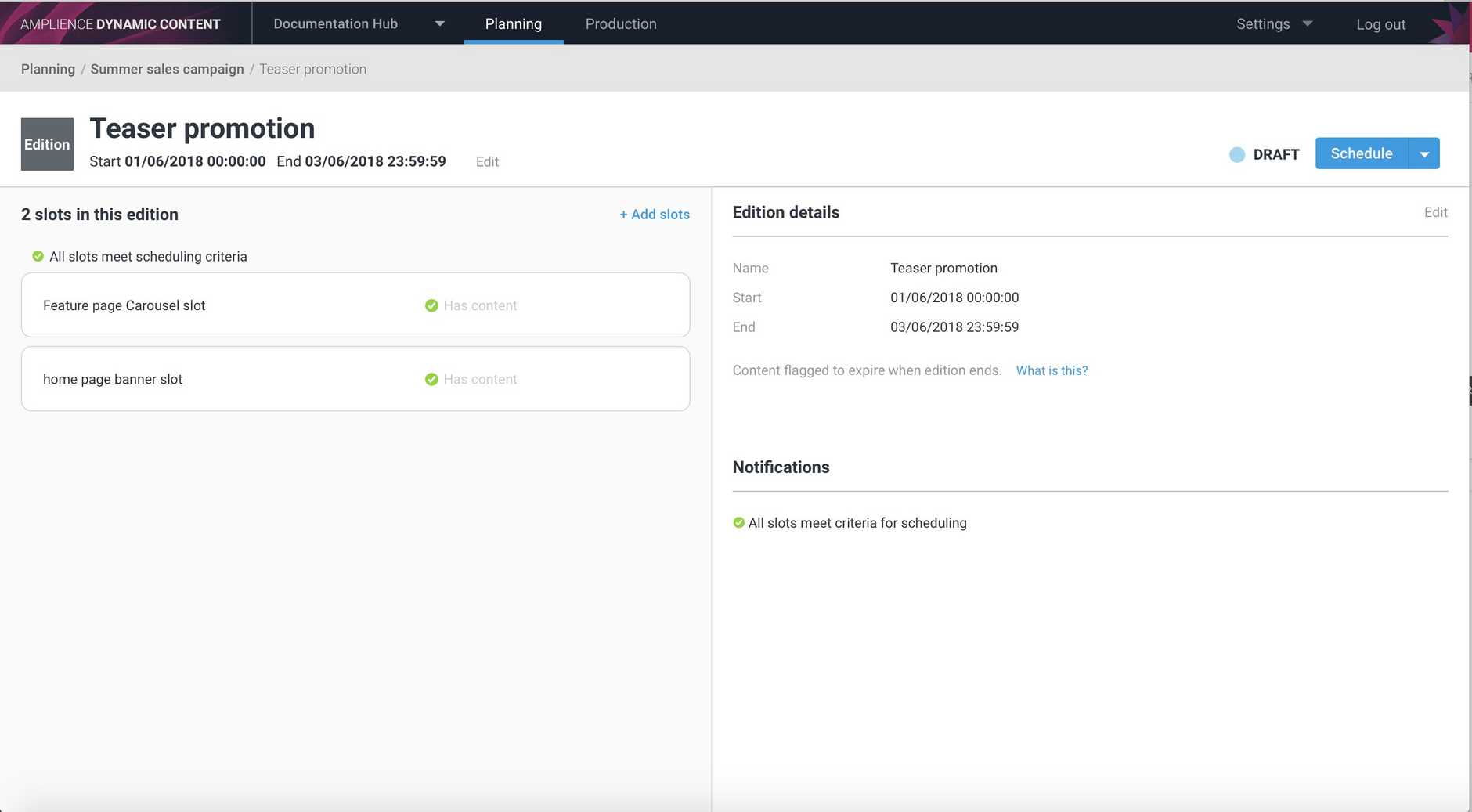 An edition may not be scheduled if the slots that have been added to the edition contain two versions of the same content. In this case a scheduling conflict warning is shown at the top of the edition window. 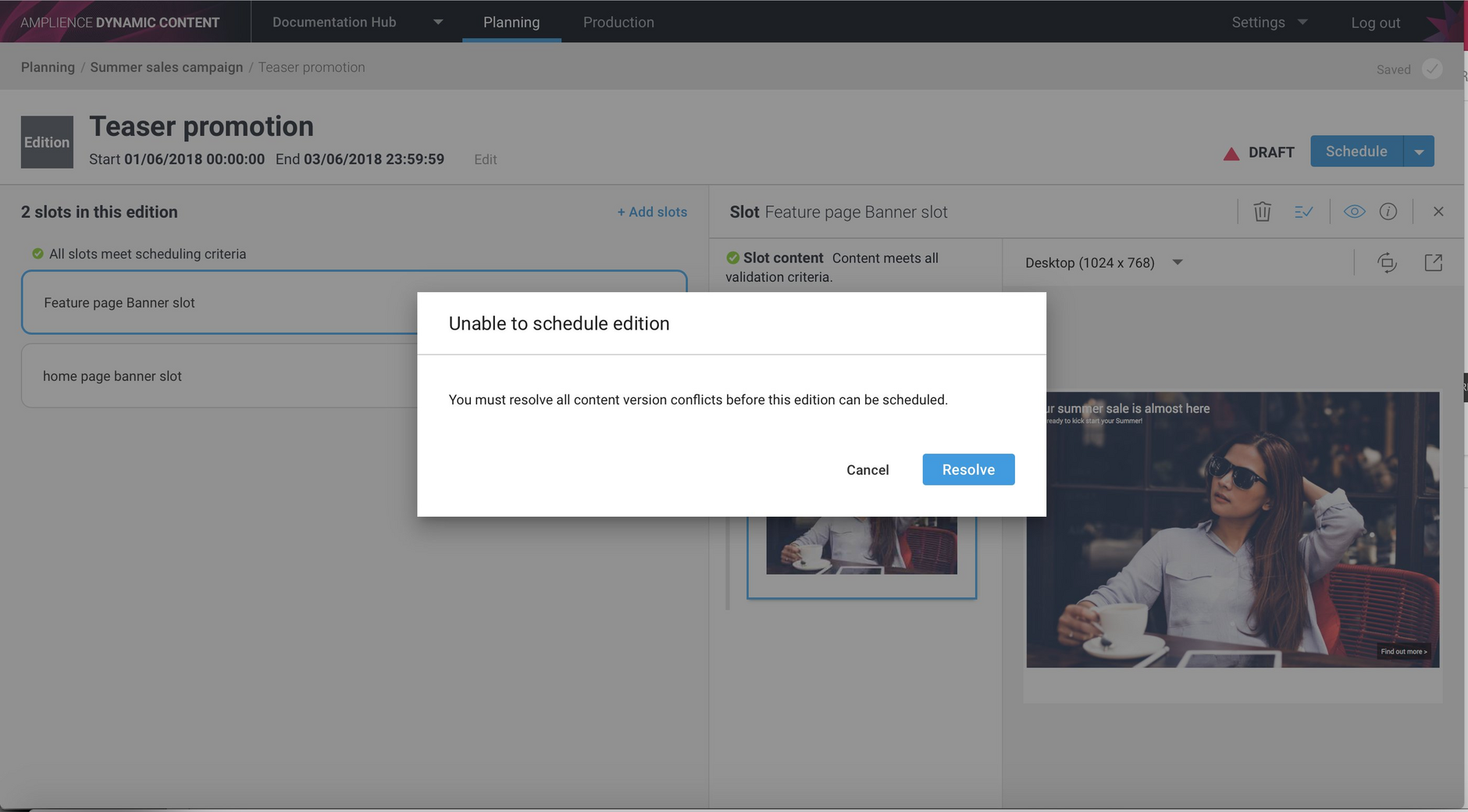 The conflict must be resolved before the edition can be scheduled. To find out more about the conflict resolution feature, visit the resolving version conflicts page.

Another issue preventing an edition from being scheduled is if the edition contains one or more archived slots. 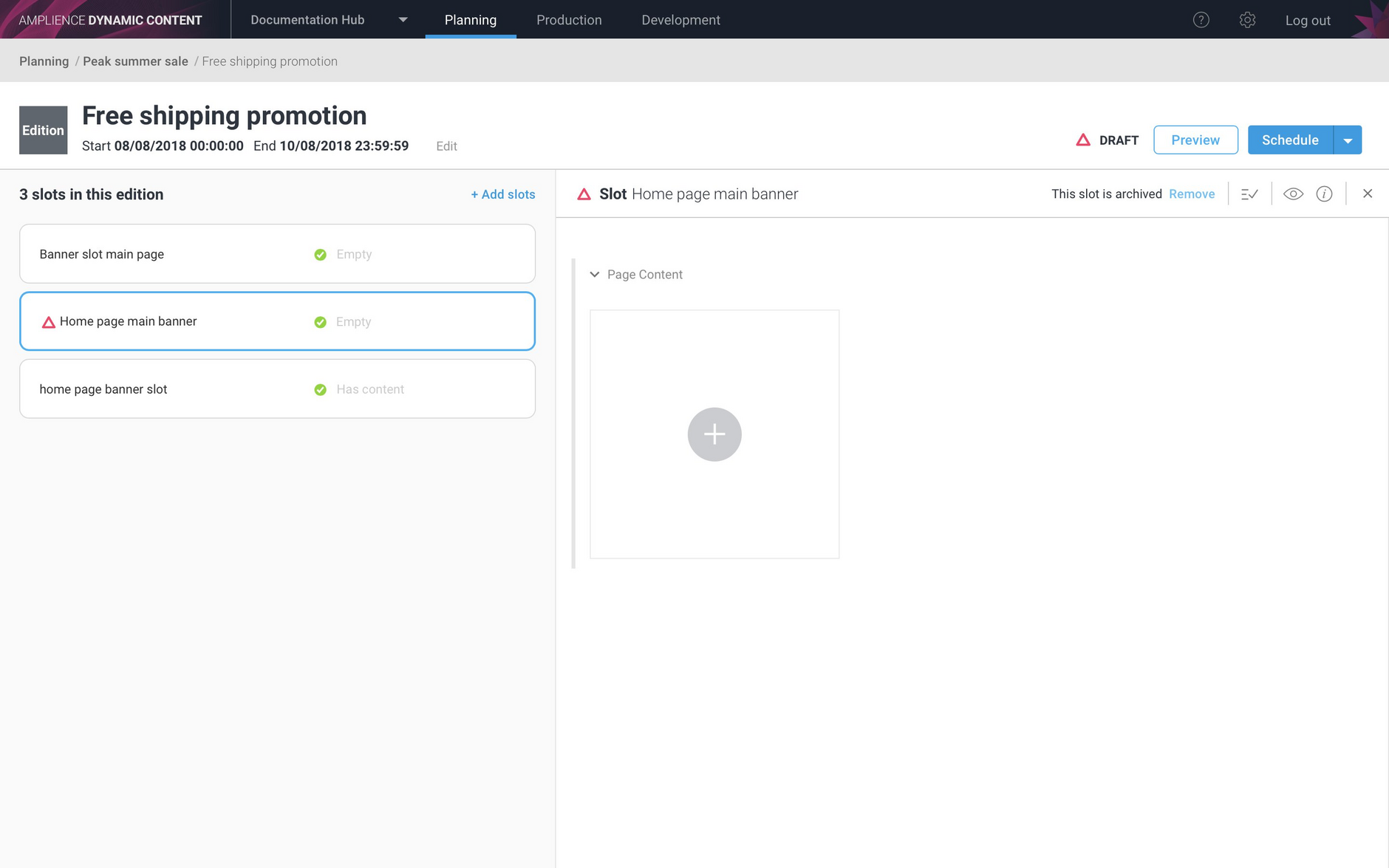 See Archiving slots for more information about how slots are archived and unarchived in the production view.