Version history provides an audit trail of changes made to an asset, the ability to recover previous versions of the asset, and helps to enhance your workflow by providing information about when changes were made to an asset.

On this page we'll explain how to use version history and provide some examples of working with and restoring versions of images, sets and video.

In the asset version history shown below you can see that the "signature glasses" asset was uploaded, then the workflow status was changed and then the asset was published. Some actions, such as publishing an asset, will result in multiple versions being created and some of these versions will be created by the platform and shown with a user of "Amplience system".

If a version is restorable, then the restore icon is displayed on the left-hand side, as highlighted in the image below.

Not every version is restorable and this is explained in more detail in the Restoring a version section. 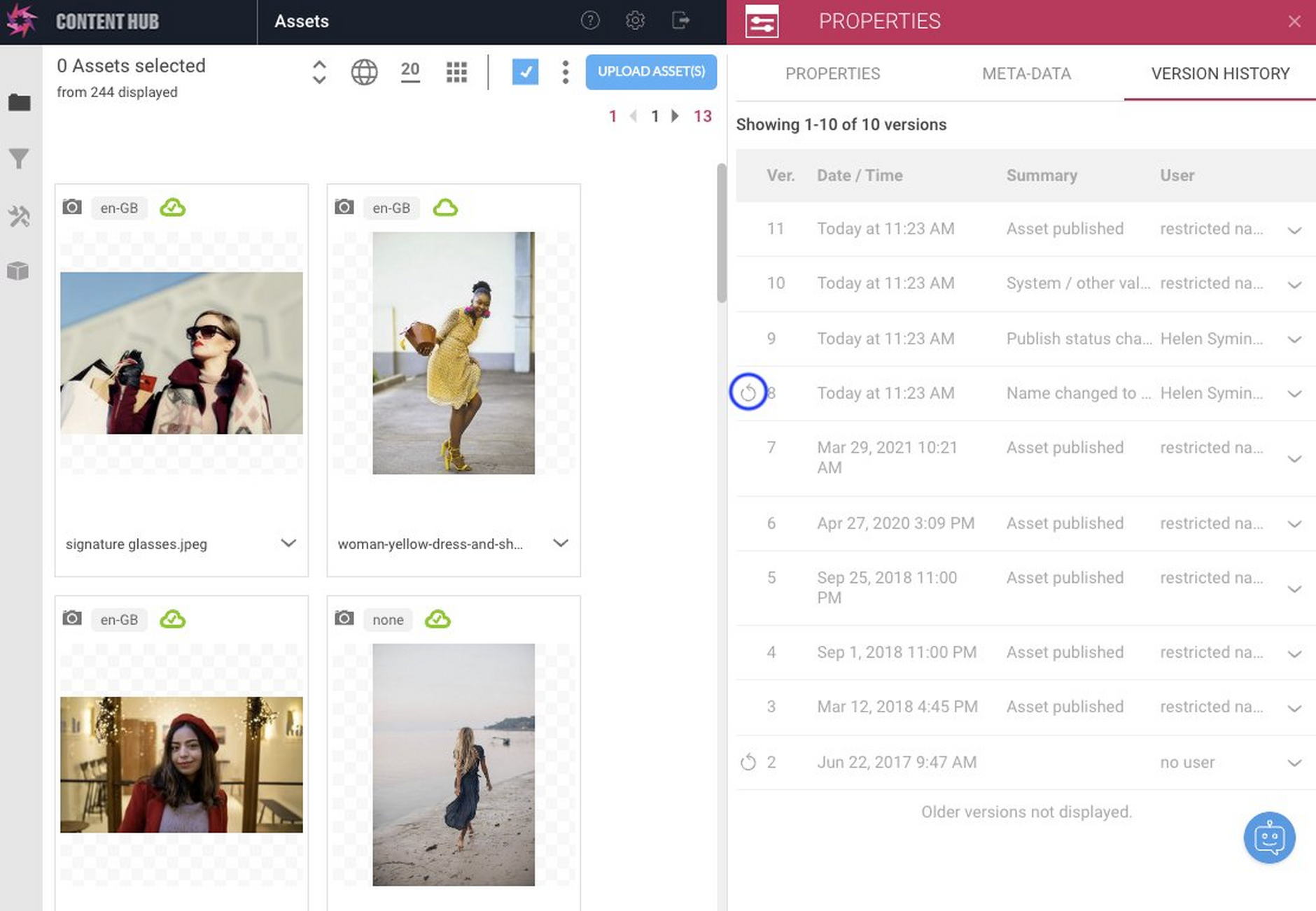 Clicking the expand icon to the right of a version will open a window providing more information about the version and a thumbnail of the asset as it appeared in this version. Here we can see that version 3 of the asset was created when the workflow status was changed to "approved". The version of the image can also be downloaded.

The details of the change are listed, together with the asset properties that were changed. 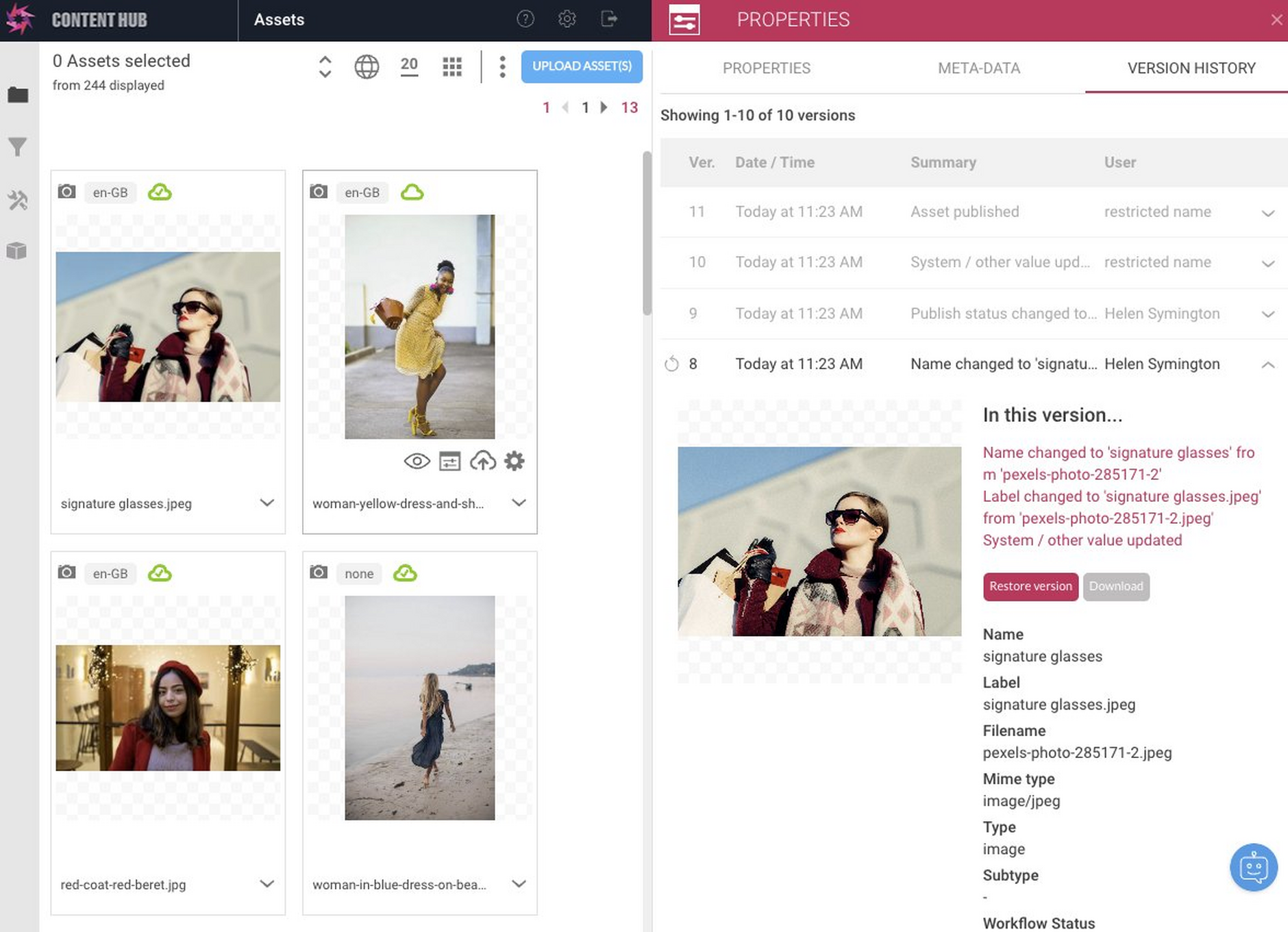 Versions can contain changes to multiple properties. For example, if you replace the file for an image asset, then both the file and thumbnail will be updated.

In the example shown below, a new version of the "signature glasses" image has been uploaded, but not yet published. The version history lists the user that uploaded the new version, together with the date. 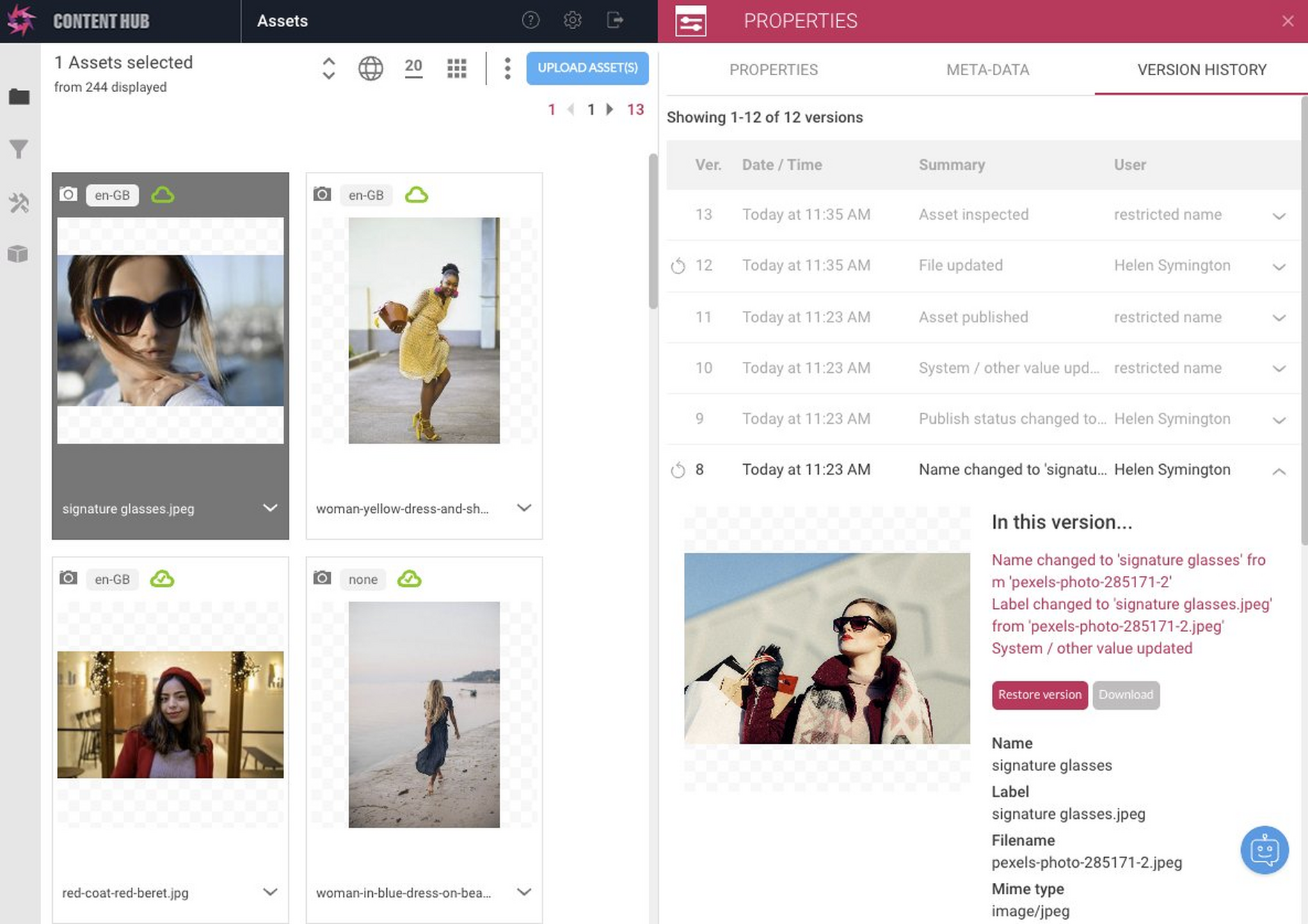 The restore dialog is displayed. 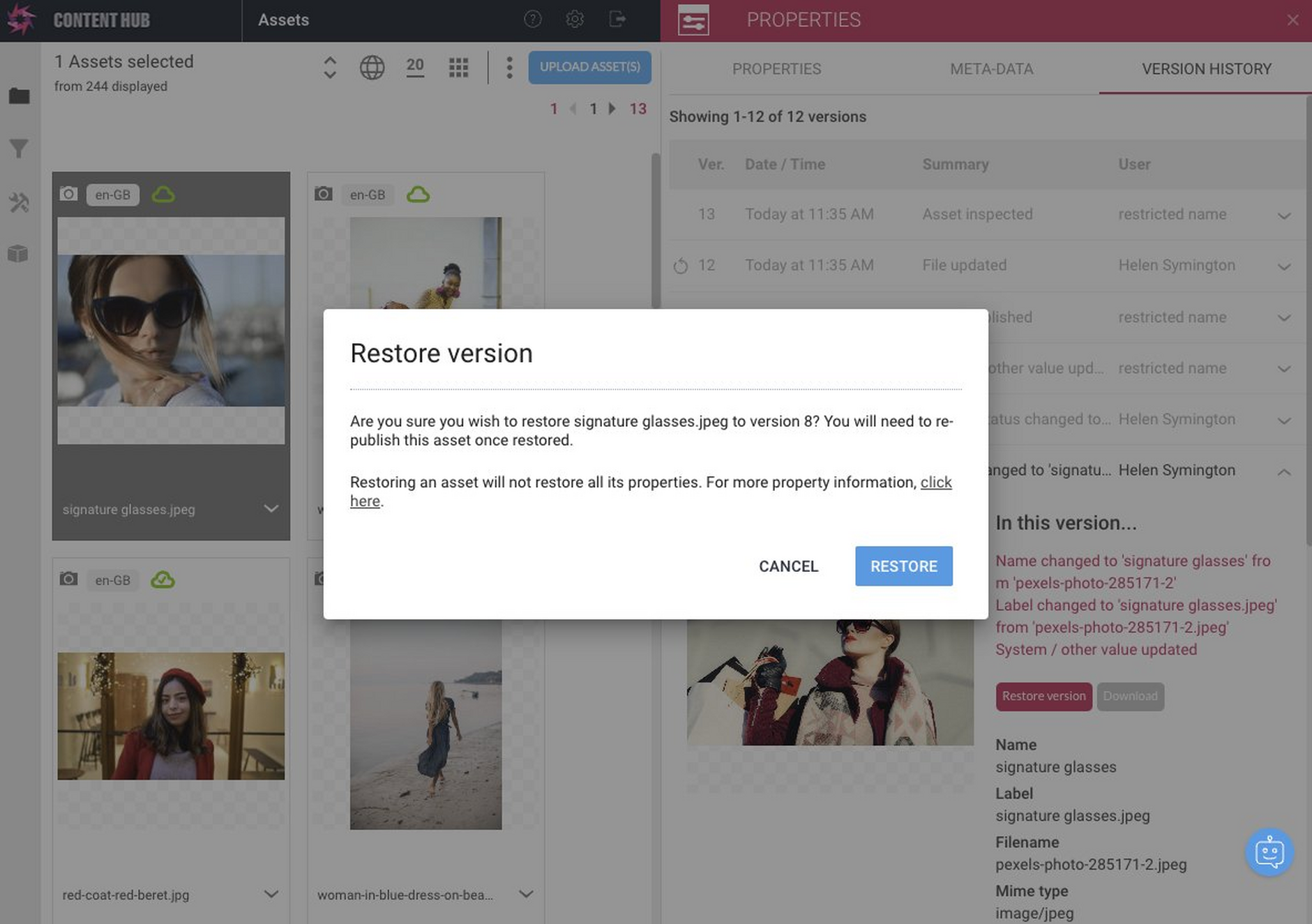 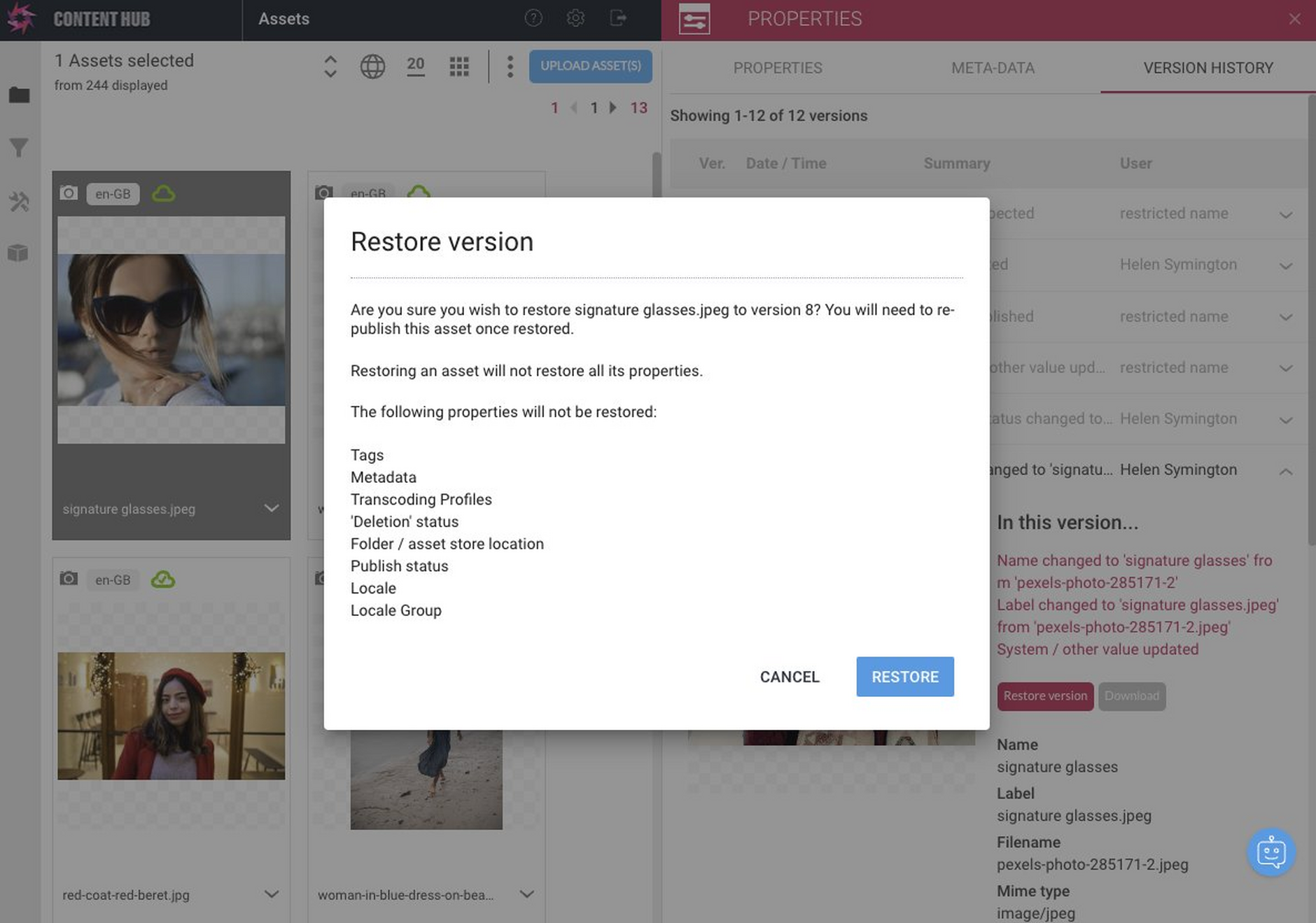 The following properties will not be restored:

If you move an asset from one folder to another, while this will create a version, the folder location of the asset will not be restored with a previous version. If the current user does not have permission to view the folder that an asset was moved from or to, then instead of the folder name "restricted" is shown.

The publish status is not restored. If you replace an image, for example and publish the updated version, then if you restore to an earlier unpublished version, you will have to publish the restored version.

Click the restore button and the original item will be restored.

A new version is created with the properties copied from version 1 of the asset, including the file, thumbnail and original workflow status. 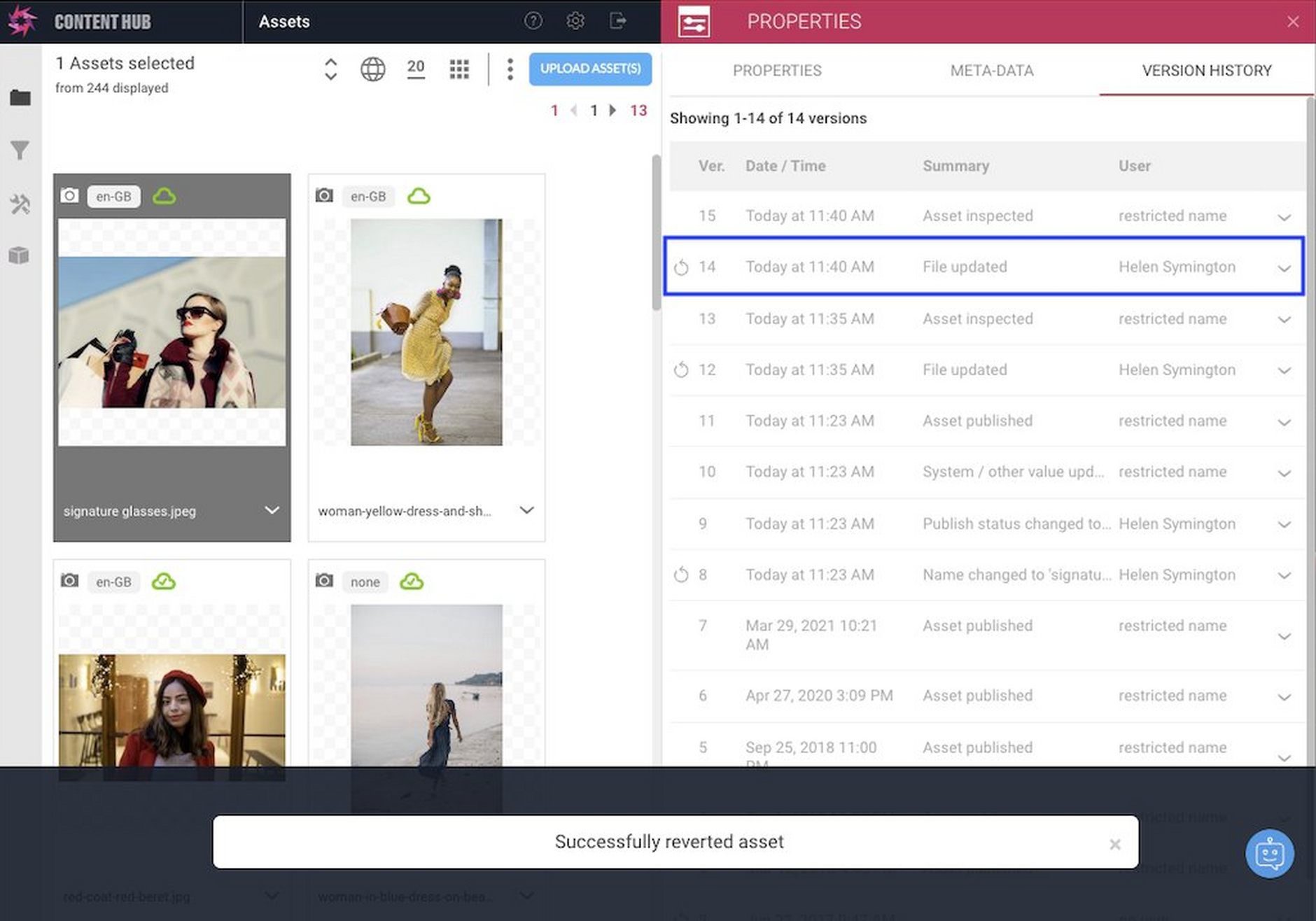 The details of the newly created version are shown below.

The details of the version created by restoring version 1. Note that while the thumbnail, file, workflow status and other properties have been copied from version 1, properties such as publish status will not be restored. This means that if another version was published, you would have to publish this version.

Versioning works the same way with sets as it does with other assets, but there is some additional functionality. If you change the contents of a set or re-arrange the order of items, then a new version will be created. You can then restore to a previous version of the set, with the set contents and order restored.

In the example shown below we have a set named winter-scarf_set. The set was created and then the items re-arranged, creating version 2. Expanding the version provides details of the changes and you can see the new order of items in the set, together with a change to the set thumbnail and, since the items were re-arranged, the set contents.

A further change was then made to the set, creating a version 3 and each previous version listed can be restored. 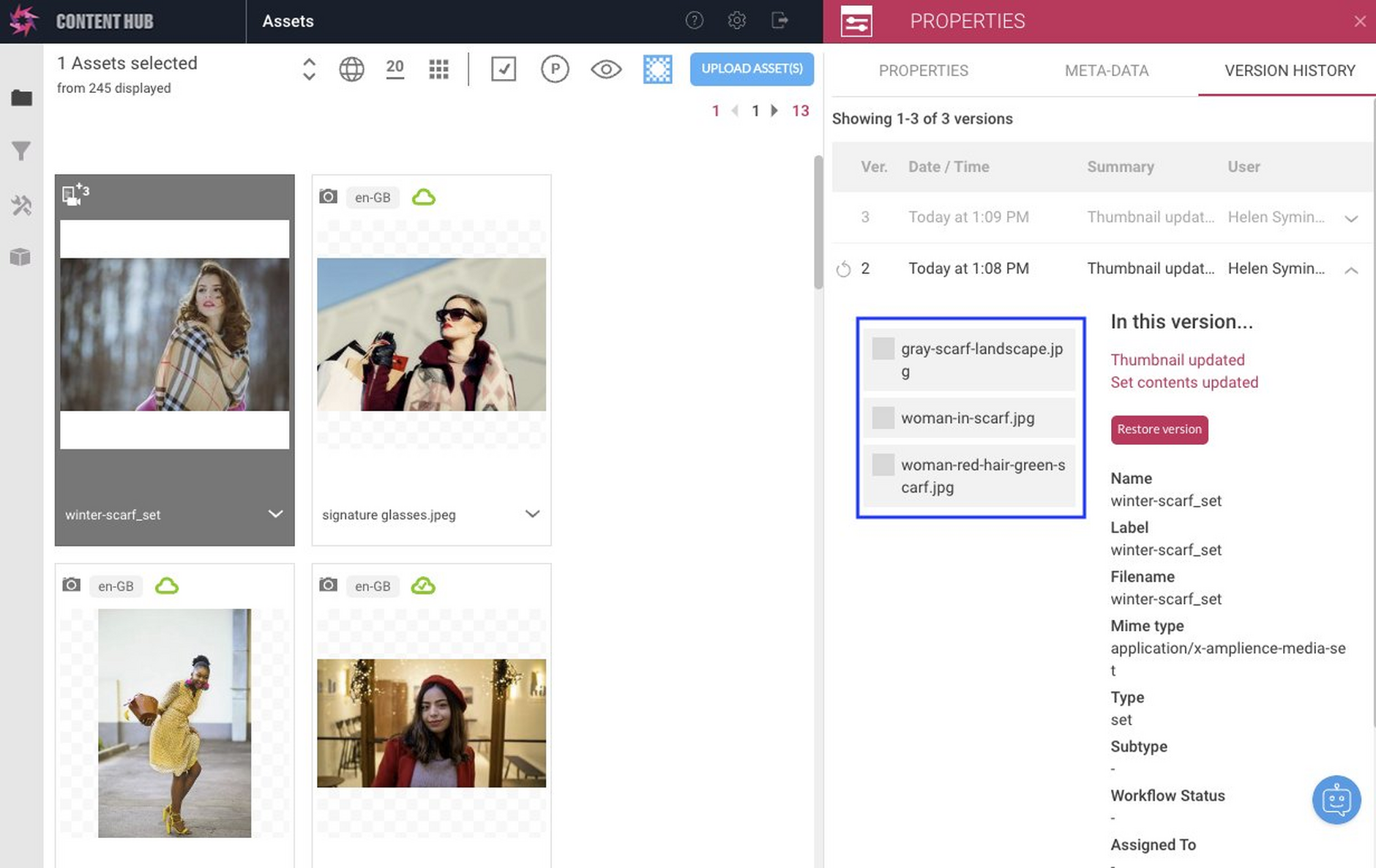 Video is also versioned, but changes to video transcoding profiles cannot be restored. However, the video thumbnail can be restored from a previous version, as shown in the image below. 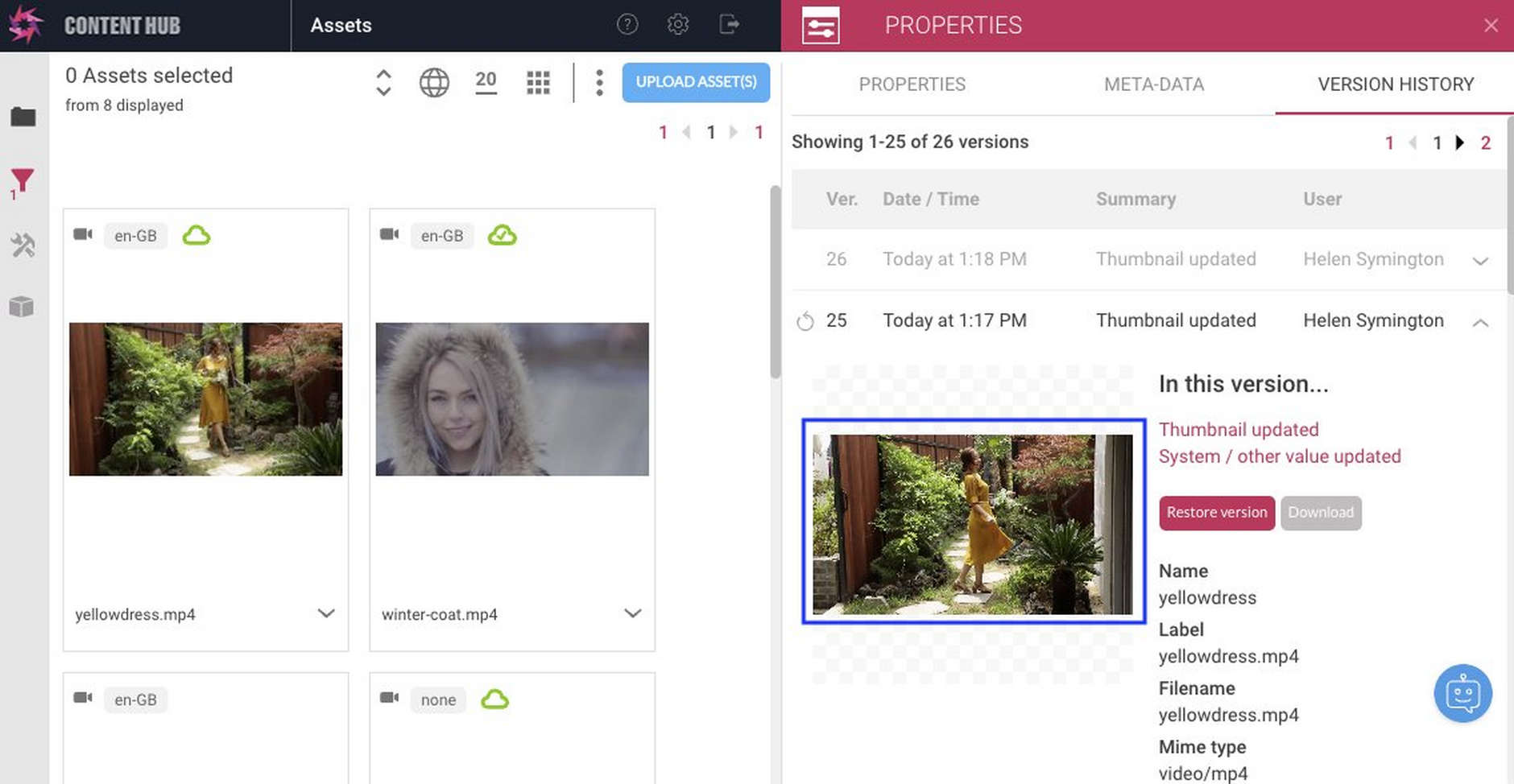 In this example the thumbnail has been updated and then changed again. Each time a new version is created and the previous version can be restored.