Digital content provides online retailers with the tools they need to deliver a rich, engaging experience that keeps brand loyalists happy and helps capture new customers. Despite the opportunities that content offers, many brands struggle to utilize it effectively, which is where Amplience comes in.

If you’ve read some of our previous posts you know about our BCI, which benchmarks digital content performance in five key areas: editorial content, rich product media, social media, user generated content (UGC) and guided selling. We’ve blogged about how brands in a variety of categories, including beauty, homeware and department stores, are meeting the Big Content Challenge, and we’re focusing this latest installment on footwear retailers.

The chart below depicts the twenty-three brands we looked at, their score in each of the five dimensions, and the final BCI assessment which reflects their cumulative ranking in each category. 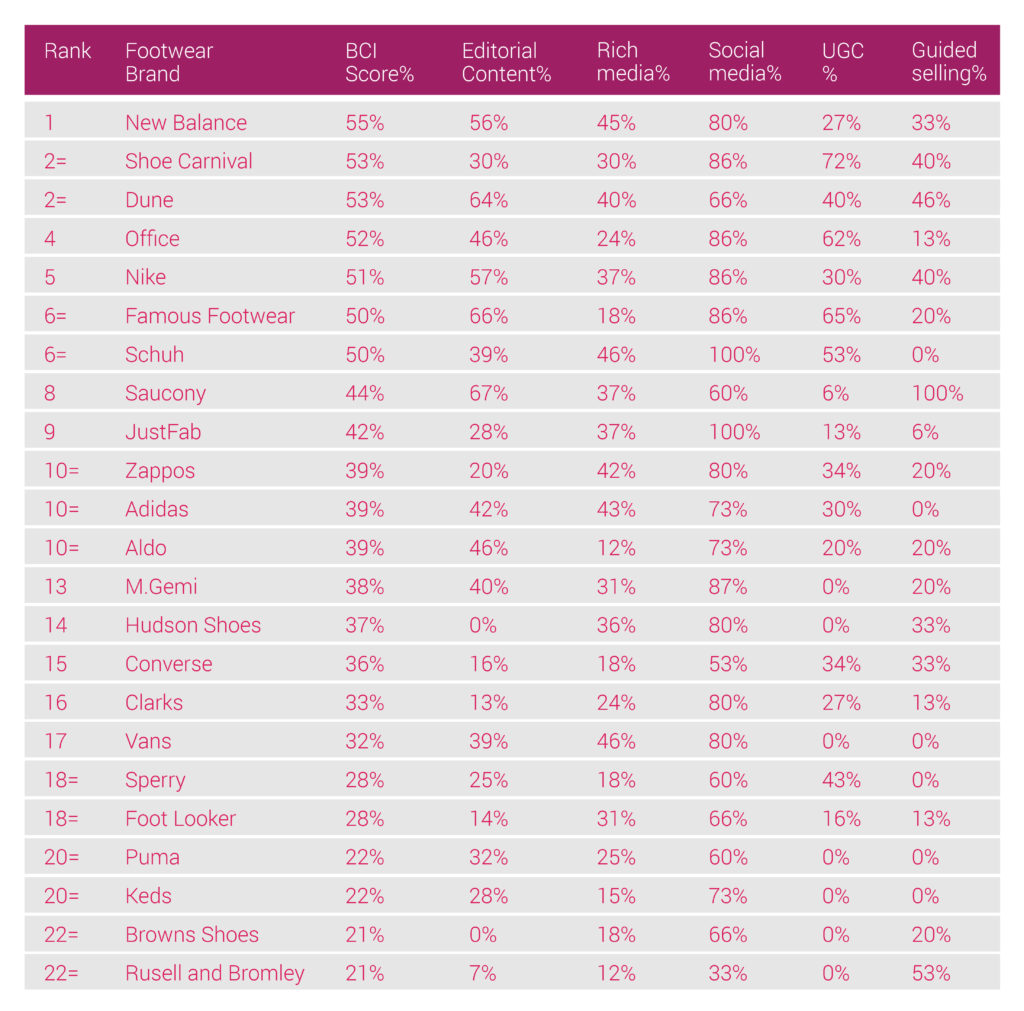 Only seven brands—New Balance, Dune, Shoe Carnival, Office, Nike, Famous Footwear and Schuh—scored in the 50th percentile or above, and none of these retailers scored higher than 55 percent. An additional two companies placed in the 40th percentile. The remaining fourteen retailers scored somewhere in the 30th or 20th percentiles, however, with an average score of 31 percent. These findings underscore that the majority of footwear retailers have a long way to go before they can realize all of the benefits of digital content.

That’s not to say that it’s all bad news for footwear brands, however. Social media proved to be an area where many of the companies performed well. Amplience customers M.Gemi and Shoe Carnival were among the leaders in the category, with scores of 87 and 86 percent, respectively. Shuh was the highest performing retailer with a score of 100 percent, and Office, Nike and Famous Footwear also had scores in the mid-80th percentile.

All of the brands assessed had some form of rich media on their sites, though the scores ranged from 46 percent to 12 percent. This shows that there is a wide spectrum of rich media use in the industry, but it’s encouraging to see all of the retailers we studied embracing it to some extent. With the exception of two brands, editorial content was also utilized by all of retailers included in the assessment.

The scores were more varied in the UGC and guided selling categories, however. Shoe Carnival outperformed the competition with UGC, leading the group with a score of 72 percent. Seven brands came in at zero. Use of guided selling reflected a similar diversity in scores. Saucony received a perfect score of 100 percent, while Schuh, Adidas, Vans, Puma, Keds and Sperry all scored zero. It’s interesting to note that the latter two brands are owned by Wolverine Worldwide, which is also the parent company behind category leader Saucony.

As 2017 approaches, many brands are reviewing their technology investments and thinking about new ways to engage with customers. Our footwear BCI assessment shows that the majority of retailers in this category could be much more effective and competitive by better harnessing their digital content.

So will next year be the year that more brands overcome their Big Content Challenges? Check back here for future posts to find out and, in the meantime, drop us a line if you’re interested in how Amplience could address your content needs.